Will Writing with McClure

10th-16th September is Remember a Charity Week. Legacy giving – the gifts which people leave in their wills – are an important source of funding for UK charities. It makes up 6% of the charity sector’s total income. Charities of all sizes rely on legacies in carrying out their work.

Only 7% of the population currently leave gifts to charities in their wills. However, 35% of people say that they would be happy to do so. It’s been calculated that if these people helped out, UK charities would get a massive £7 billion more. That’s where Remember a Charity comes in. It brings 200 of the UK’s favourite charities together in the charity sector’s leading campaign to increase charity will-giving. Legacy giving isn’t just for the rich and famous. Any gift is welcome.

Naturally, the AKU Society encourages our supporters to leave us money in their wills – and we’re promising you something in return. On the advice of a patient, we have teamed up with a nationwide law firm, McClure Solicitors. Through this partnership, McClure offer supporters of the AKU Society three important legal services: free will writing, free will reviews and half price power of attorney. 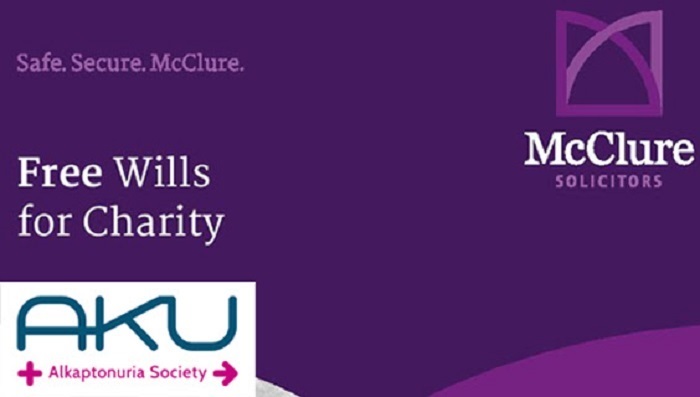 McClure Solicitors is a very prestigious legal firm. These services would normally cost £150 for a single client or £240 for a couple. All we ask in return is that you leave a gift – of any size – to the AKU Society in your will. This is a great way to ensure peace of mind for the future and support the AKU Society at the same time. Thanks to McClure’s generosity, we win and you win.

We are not the only charity which McClure support in this way. In July (the last month’s figures which are available), McClure’s clients raised an incredible £3 million for charity. Almost all of this came from people leaving gifts in their wills. So far, they have raised £18 million in 2018, putting them on track to beat their 2017 total of £30 million. It’s up to us to make sure some of that money goes to the AKU Society!

McClure Solicitors are headquartered in Glasgow, but have offices in Birmingham, Exeter, Leeds, Liverpool, London (Pall Mall and Covent Garden), Newcastle, Plymouth, Southport, Truro, Aberdeen, Edinburgh, Glasgow, Inverclyde and Cardiff. They also offer home consultations. Want to find out more and take advantage of their services? Check out their website or phone 0800 8521999.

Last year, our ex-CEO Oliver Timmis and former trustee Colleen Addicott drew up wills with a McClure advisor. Colleen said,
“I have to admit that we had put off will writing a number of times. It seemed like a lot of hassle and tended to slip down the list of priorities. My husband and I took the opportunity to make a donation to the AKU Society and have our wills done at the same time through McClure solicitors.  I am so glad we did!

It was actually very straight-forward – a few questions and a two-sided form. Even though there were a few complexities in our case, it was completed very quickly. Paul, our advisor, provided really helpful insight and we set up lasting powers of attorney at the same time as our wills. We now have peace of mind and were able to make a donation to the AKU Society at the same time – win-win!”
Robert Minter2019-04-01T05:35:16+01:00September 12th, 2018|