On 22nd-24th September Lesley, our Patient Support Manager, and Alistair, the Coordinator at the National AKU Centre in Liverpool, attended the British Society of Genetic Medicine (BSGM) Conference in Liverpool. This week we look at how the conference went, and examine the importance of attending these events.

The BSGM Conference is a forum for all workers in human and medical genetics to review advances and develop research collaborations. It is one of the major events in the field of human genetics, with delegates and speakers attending from around the world. It was held for the second time at the impressive ACC on Liverpool’s waterfront, overlooking the river Mersey and close to landmarks such as the Albert Dock, Tate Gallery and many of Liverpool’s historic buildings, including the stunning Liver Building.

The event has an international reputation for bringing together researchers and health service professionals to present the latest genetic knowledge, research, and clinical practice. It also offers a unique opportunity for commercial organisations to promote their products and activities alongside charitable organisations with an interest in genetics.

All aspects of genetic medicine were covered and catered for, with International experts from UK, Europe, Asia and North America attending the varied scientific programme. The best of genetic medicine research and development in the UK and Europe were presented under one roof.

This was Alistair’s first conference with the AKU Society and he wasn’t sure what to expect. However, Lesley and Alistair soon developed a tactical approach to raising and promoting awareness of AKU to as many conference delegates and exhibitors as possible. 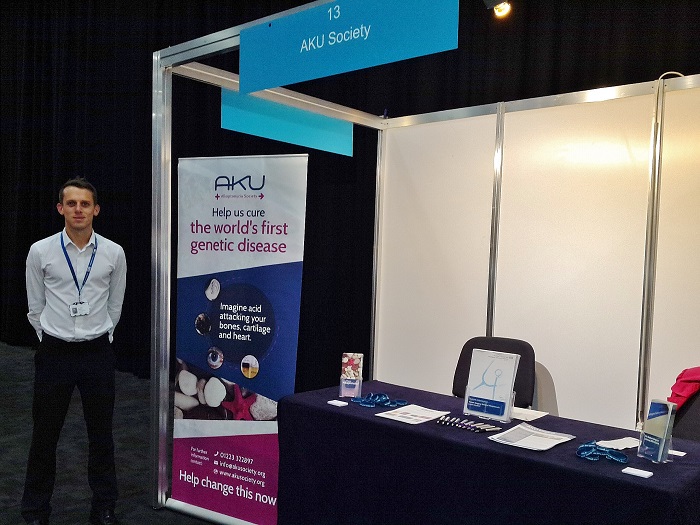 The conference had a dedicated trade exhibition and poster viewing time on Tuesday afternoon. While Lesley manned the AKU Society stand, Alistair set off, leaflets in hand, approaching as many other exhibitors stands as possible. Instead of asking what their products were, he asked if they knew what the first genetic disease ever discovered was, and if they had heard of black bone disease. This turned out to be an excellent tactic!

There was also a Trade Exhibition Competition encouraging delegates to visit as many stands as possible. This competition was popular with many of the delegates. It gave an opportunity to win an iPad mini if delegates could collect a sticker from each of the exhibitor stands. Mindful of this, Lesley kept the AKU stickers from view, not allowing anyone to have one without hearing her short presentation on AKU and the National Centre.

By working together Lesley and Alistair undoubtedly raised the profile of the Society and increased the awareness and understanding of AKU amongst a large group of medical professionals and organisations.

The conference also provided some useful contacts, including a geneticist from India who had recently diagnosed a young boy with AKU, and a geneticist from Northern Ireland who was aware of two children with AKU who had recently moved there from Romania. Both were given details of the AKU Society, local contacts such as those in India, and details of recent research. We hope this information will, in some small way, help improve their quality of life.

Lesley and Alistair were able to catch up with representatives from Progress Educational Trust, Genetic Alliance, Unique and EDS. At the same time we managed to promote upcoming events. For example, we shared our plans to raise awareness of rare diseases and Specialised services in Wales in the new year.

Next year sees the European Genetics Conference, which will be held in Glasgow in June. With over 3,000 delegates anticipated this will no doubt prove to be another useful event for raising awareness of AKU.