SONIA 2 – An Update on our Clinical Trial

Our SONIA 2 clinical trial is underway at all our sites across Europe. Conducting such a complex trial across three countries is not easy, but the teams at each centre have been working hard to ensure everything runs smoothly. Today we take a look at how the trial is progressing. 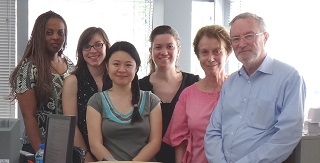 Every week more patients have been joining our clinical trial and going for their first visits. In Liverpool we have already had seven patients for their first visits, and even more are booked in to visit in the coming weeks. Our Paris site has had 18 patients, and Slovakia has already seen 33. Although we are still looking to recruit more patients, we are pleased with the amount of interest received so far.

We are spreading the word about our trial across Europe: so far we have done press releases in France and Spain. The most recent press release in Spain has resulted in more than 50 articles in various newspapers and online. We hope this will identify more AKU patients including some who may be interested in the trial. 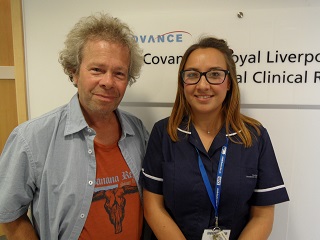 Each week one member of staff from the AKU Society has been going up to Liverpool for two days at the start of the patient visit to provide support. Many of the patients have travelled long distances, and some speak no English. We understand this can be daunting, so providing support before, during and after each visit is key.

Last week Robert travelled all the way from Sweden to join the clinical trial. He was not diagnosed until he was 62 years old after his second hip replacement operation. The doctor noticed his bones were black and investigated further. Another doctor recognised the signs from a previous operation he had done, and identified it as AKU.

Robert heard about SONIA 2 from a doctor in Sweden who asked if he wanted to take part. Robert immediately said yes because he wanted to meet somebody who knew about his disease.

He says , “Eventually I understood I could meet somebody who knew something about it, so I wanted to go even if they couldn’t do anything about it.”

He is also keen to help the next generation, as he hopes that his participation will help improve treatment in the future. Now there is a treatment being tested he says, “The next thing is to teach the doctors to [diagnose the disease] .”

During the clinical trials patients have to undergo many tests and assessments, from MRI scans to physiotherapy assessments. Most of these are simple, non-invasive procedures, but some patients have been concerned about the ear biopsy.

In this procedure, a local anaesthetic is givenand a small piece of cartilage is taken from the back of the ear. This is used to assess the amount of black pigment (ochronosis) in the ear cartilage. The osteoarthritis in AKU is caused by this black pigment attacking the joints.

The cartilage in the ear is much more easily accessible than the joints and will give us an idea of how advanced ochronosis is. We will be able to compare the amount of pigment in patients of different ages and how this changes in patients on nitisinone and those not taking nitisinone.

This procedure can sound daunting, and many patients imagine it will be worse than it really is. That is why we put out a post on Facebook asking other patients who have had the procedure to tell us what it was like. We got some good responses.

One NAC patient said : “First I was given a small injection in my ear to numb any pain, which caused a small amount of discomfort for 2 seconds. The procedure took all of 5 minutes and I didn’t feel a thing. All the time I was having it done the doctor and the nurse where talking to me and putting me at ease.”

Another NAC patient said “I also was apprehensive before I had it done and it was fine.  The area on the ear is completely frozen and it’s a very small piece they do – not noticeable at all. My ear was sore for a little while afterwards but I soon forgot about it.  If I had to get it done again I wouldn’t mind!”

Another patient taking part in the clinical trial in Paris confirmed it didn’t hurt and a Brazilian  patient said it was simple and painless.

Have you had an ear biopsy? Let us know what it was like by commenting on Facebook or emailing Hana.

As many of you will know, the DevelopAKUre website is the place to find out everything about the clinical trials. We even have a dedicated trial blog where you can find out even more. You can also always email Hana to ask any questions at [email protected].