On the 15th October 2014, Robert Gregory sadly died. He was one of the most important figures in the history of the Society and is greatly missed. In testament to his achievements on this sad anniversary, we take the opportunity to remember some of the most important moments in the history of the AKU Society, which Robert Co-founded in 2003. Without the dedication and determination of Bob, the AKU Society would not be what it is today. 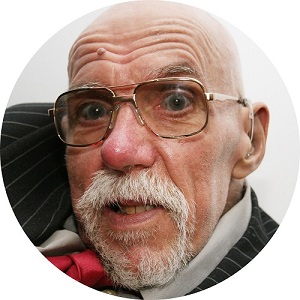 Robert Gregory was diagnosed with alkaptonuria when he was in his 40’s, but it wasn’t until the symptoms of the disease began to take hold that he became frustrated with the lack of information and support available to AKU patients. Frustrated with his situation and determined not to let anyone go through the same uncertainty, he convinced his doctor a biochemist called Prof. Ranganath who admittedly had little interest in AKU until he met Bob, to help him found the AKU Society. Now Prof. Ranganath is a trustee of the Society and the chief investigator on the groundbreaking DevlopAKUre clinical trials

When Nick Sireau’s young sons were diagnosed with AKU, he too shared Robert’s frustration at the lack of clear information or any effective treatment for the disease. He wanted a future where his sons were free to live healthy lives. He left his job at another internationally renowned charity and decided to help Robert and Prof. Ranaganth and joined the society in 2003.

Now firmly established as the first patient group for those affected by AKU, the society began researching the disease with an eye on procuring funding for a clinical trial into the effectiveness of a drug called nitisinone as a treatment for AKU.

The first step was to expand the knowledge of scientists researching AKU. This was done through a partnership with the University of Liverpool, where groundbreaking research was undertaken and led to successfully highlighting the effect of nitisinone in different models. The Society then funded clinical research into developing more accurate methods of assessing the symptoms of AKU.

Armed with this groundbreaking research the Society begun the process of drafting an application to the European Commission to fund the DevelopAKUre Consortium, a group of clinical sites and interested 3rd parties brought together to begin the long-awaited trials into nitisinone for treatment of AKU. In 2012 they were informed that this was successful. This led to the dosage trial SONIA 1 and the current efficacy trial called SONIA 2, which is due to finish in 2019.

Around the same time, the AKU Society found out they were successful in receiving funding from the Department of Health to fund the Robert Gregory National Alkaptonuria Society to be based at the Royal Liverpool University Hospital. The NAC is still going strong today and offers AKU patients expert care, advice and support. The NAC also supplies NAC patients from Scotland and England with nitisinone off-label and tracks the effect of the drug on the disease.

It is testament to Robert Gregory that we are now in this strong position. His determination and dedication in offering support and finding a treatment for this debilitating disease has given hope to thousands of AKU patients globally. UK Patients are reminded of this extraordinary legacy every time they attend the NAC in his home city of Liverpool. The AKU Society will continue this work not only to offer support to AKU patients throughout the UK and beyond but, to continue carrying on the work that was started 13 years ago by an extraordinary man.