The Royal College of Nursing (RCN) Congress is the biggest event of the nursing calendar and attracts more than 4,000 nurses from across the UK and beyond. It provides a platform for nurses to share and develop nursing practice and influence health policy debates. This year Congress was held at the ACC in Liverpool from 19th to 22nd May. Lesley, our Patient Support Manager, and Tony, an AKU patient and trustee, travelled to Liverpool to exhibit an AKU Stand. This was the 4th year we’ve had a stand at Congress and other than a handful of nurses who’d been to our stand on previous year’s, most nurses at Congress had never heard of AKU.

The first full day of Congress was extremely busy, as this was the day focussing on student nurses. It was great to see how keen and motivated they are to learn and increase their knowledge base. We promoted our forthcoming RCNi eLearning module, which will be launched soon. This has been specifically designed to raise awareness of AKU amongst nurses and help them understand how AKU can impact on the quality of life of patients and their families or carers. By completing the module, nurses will gain Continuing Professional Development (CPD) points, an important part of the revalidation process that all nurses in England need to follow to maintain their registration with the Nursing & Midwifery Council (NMC).

With Congress in Liverpool, some of the team from the NAC were able to join Lesley and Tony on the stand. Shirley the dietitian and Helen and Emily, the research nurses, came down to offer their support as well as taking the opportunity to look around the exhibition area. Lesley visited some stands that may be of interest to our patient group and hopes to involve some of them in future patient workshops. 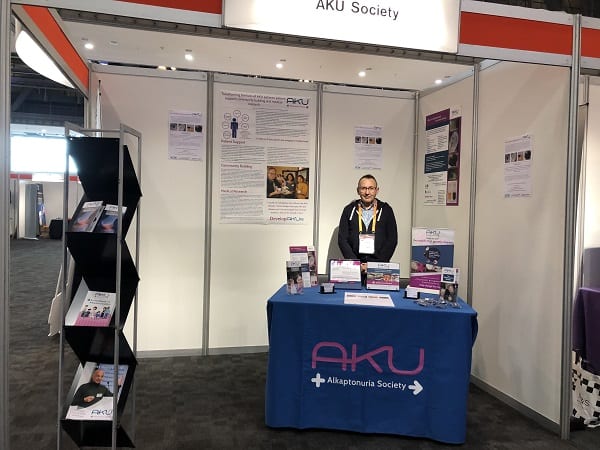 ‘The busiest day was on Monday, which was aimed at students. Lesley and I were kept extremely busy with students keen to improve their knowledge. The other days we had a steady stream of people with many surprised they had not heard of AKU before. It was also useful for them to be able to talk to a person who had AKU and to explain what it was like living with it. I don’t know how many times I had my ears felt!’

‘We also had people who had visited the stand in previous years who came along to check on how things were progressing with the research. One surprise I had was when I was approached by a lady who knew about the illness because she knew of someone who had AKU but was not attending the NAC.’

‘It was not just the opportunity of spreading the word about AKU to a group of professionals who are more likely to pick up on the symptoms but also the opportunity to network with other organisations where their products may help people with AKU. I came home with trainers and clogs that help with posture and help cushion the impact of walking in the spine.’

Helen and Emily joined Lesley and Tony on the stand on the final day. They thoroughly enjoyed educating and disseminating information regarding AKU to other health care professionals attending the Congress and said it was great to have Tony there to give a patients perspective. According to Helen and Emily, they had a lot of interest in AKU and positive discussions which in turn delegates will be able to relay back to their colleagues and areas of work to promote this rare disease including identification of symptoms, referral and management processes.

They spoke about the NAC at the Royal Liverpool University Hospital and how this specialist service provides valuable help to those living with AKU. As Research Nurses working within the field of AKU, attending the Congress was a worthwhile and enjoyable experience. They said Congress provided them with the platform to promote the RCNi nursing module which they have co-written with Lesley.

It was fantastic to explore other stands and areas of the exhibition and chat amongst other exhibitors, health care professionals and charities to raise awareness of AKU.
Overall the event was a great success with many more nurses now working with a knowledge of AKU. We have already booked our stand for RCN Congress 2020 which will again be held in Liverpool and look forward to educating more nurses about AKU.
Robert Minter2019-12-16T17:46:29+00:00June 14th, 2019|