The Royal College of Nursing Congress is held each year to bring together over 4,000 nurses. Coming from a variety of areas to develop and learn nursing best practice, it is the biggest nursing event of the year. This year’s Congress was held in Liverpool at the ACC Liverpool from 13th – 18th May.

Here at the AKU Society, we are always aiming to raise awareness of alkaptonuria in order to improve the lives of patients and to help the chances of an early diagnosis. Attending a conference like the RCN Congress is a great opportunity for us to help healthcare professionals to learn more about AKU, explaining the early symptoms patients can exhibit and where to refer them for treatment; the National Alkaptonuria Centre at the Royal Liverpool University Hospital. For this year’s Congress, Robin and Lesley travelled to Liverpool to exhibit an AKU stand. 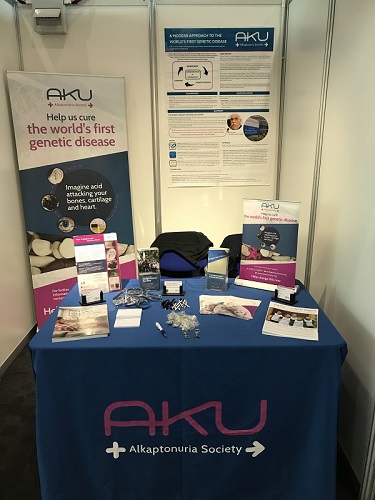 Speaking to the nurses over the course of the Congress it was evident that the majority of them had never heard of AKU before. Robin and Lesley spoke to nurses from a wide range of backgrounds including students at various stages of their training, those working in the community, mental health and orthopaedics. There was even interest from a number of people who had retired and wanted to keep up to date with new conditions and developments in nursing. With AKU being a multisystem disease it is vital that medical professionals from different specialities are aware of the disease.
A resource that proved particularly sought-after over the course of the conference was the AKU e-learning module. Created with help from the Royal College of General Practitioners, this online educational training was in great demand from those who visited the AKU stand especially as it could be used as part of their revalidation, with Robin & Lesley giving out information on the module over 250 times over three days.
Robin and Lesley also had the opportunity to explore the conference to meet some of the other companies and charities who were exhibiting there. Lesley linked up with Arthritis Research UK who have agreed to participate in our next patient workshop which will be in November. Lesley is also exploring the possibility of working with Arthritis Research UK as they look to develop a Peer Support Programme, which in the initial stages will focus on pre and post joint replacement.
Throughout the event, it was clear that the nurses in attendance were keen to learn more about AKU, with several people asking Lesley to come and do a training session at their place of work to help educate their colleagues about the disease. 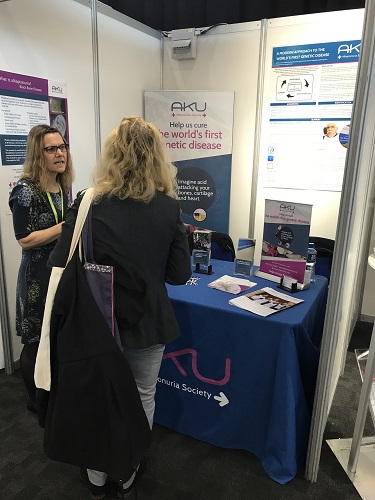 During the event, Robin & Lesley came across a few attendees who had links to the AKU Society. They met a nurse who worked in a lab at the Royal University Liverpool Hospital who did not know that much about AKU, despite working in close proximity to the National Alkaptonuria Centre. They also met an exhibitor who’s Uncle had AKU. Speaking to her she was thrilled to meet the AKU team to learn more about her Uncle’s condition.
It was also great to see that a few of the nurses had heard about AKU from the disease featuring on a recent episode of Incredible Medicine: Dr Weston’s Casebook. Which told the story of the AKU Society Chairman Nick Sireau and his experience in searching for a way to treat AKU.
Robin said of the event “It was great to see the interest people had in our stand, you could sense a real passion for learning in the nurses. I spoke to one nurse who had been retired for several years but wanted to hear more about the disease just to be more informed on something she knew nothing about. It was inspiring to see so many people with an interest in AKU have a new found knowledge of the disease, which may hopefully one day go towards diagnosing a patient.”
Overall the event was a great success, with many more nurses now working with a new knowledge of AKU. We look forward to exhibiting at future events like the RCN Congress, with them proving to be a beneficial experience.
Robert Minter2019-04-02T07:13:00+01:00May 25th, 2017|