October at the AKU Society

The AKU Society has had a hectic month. In today’s blog, we hear about what each team member has been up to.

Our Fundraising Officer, Juliet, and Patient Support Manager, Lesley, were both in Glasgow for the Findacure Showcase on the 10th October. It was at the University of Strathclyde, an excellent venue for the attendees to celebrate rare disease projects in Scotland. An AKU stand was set up, with leaflets explaining Alkaptonuria and even some chocolates for the attendees. Rick, the CEO from Findacure, started the showcase off by introducing Findacure. The lightning talk session was one of the highlights. It gave rare disease charities an opportunity to summarise what they do, all in a 5-minute session, with a bell at the end to add to the excitement. Another highlight of the showcase was Morven-May MacCallum’s talk about her battle with Lyme disease; it was a very moving speech that discussed her experiences with dealing with the disease. The showcase was a great opportunity to learn more about rare disease work in Scotland, and the issues charities face. 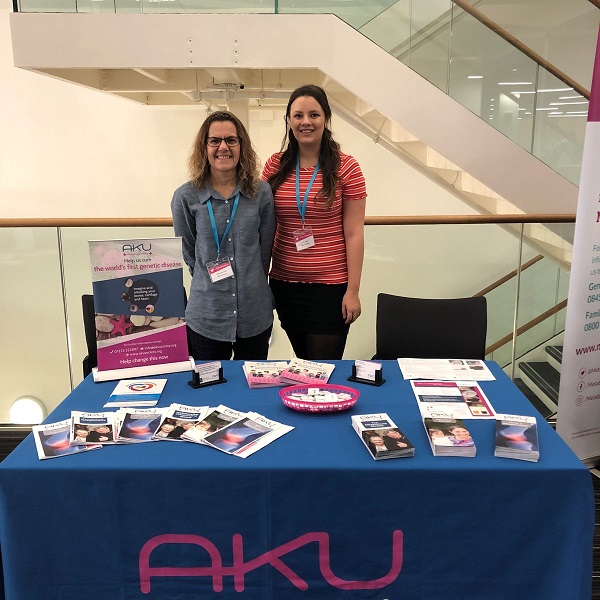 On 17th and 18th October, Lesley, our Patient Support Manager, and Tony, one of our AKU patients and trustees, went to the Birmingham NEC to run a stand at Best Practice 2018.
Best Practice attracts more than 5,500 GPs, practice managers, GP federations, nurses and clinical commissioning group professionals all gathering in one venue and is the primary care community’s favourite event.

Tony said he was pleased to be asked to join Lesley and how crucial it is for a patient to be there. This was apparent in the conversations he had with people coming to the stand. They were able to talk to him about what it is like living with AKU and to look at his eyes and ears, which have been discoloured by ochronosis. One GP who came to the stand had just recently diagnosed three children with AKU from one family.

Lesley and Tony had the opportunity to explore the exhibition, meeting companies and other charities. It was also good to meet up with companies Oatly and Sole Mates which have supported us at our patient workshops. Lesley spoke to the team on the stand of the Royal National Institute of Blind People (RNIB) about reviewing our website to see if the tools we use make it accessible for people with impaired vision.

It was a long and tiring few days, but worth taking the time to raise awareness of AKU among so many healthcare professionals. 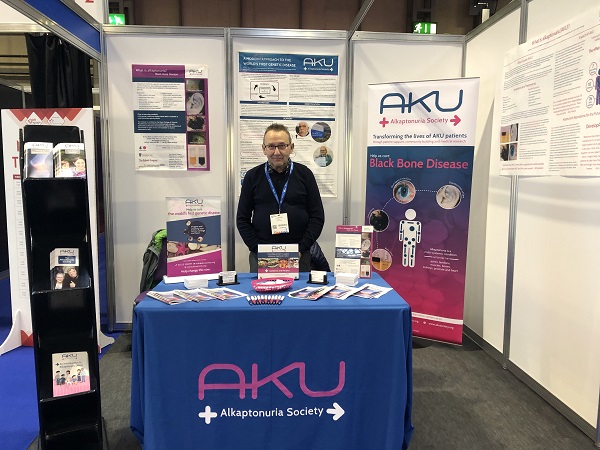 On 17th and 18th October, our Communications Manager Ciarán was in Cardiff to attend two exciting events.
On the 17th, he attended the UK Rare Disease Forum held in the impressive Temple of Peace in the heart of Cardiff. The event was hosted by the UK rare disease policy board, which was established to develop policy and ensure the commitment to the UK strategy for rare diseases. The purpose of the meeting was to update the members and stakeholders of the process of this implementation along with the sharing of information between policymakers and patient representatives. It was an interesting day that Ciarán felt was useful in keeping up to date with the government’s thinking about rare diseases. 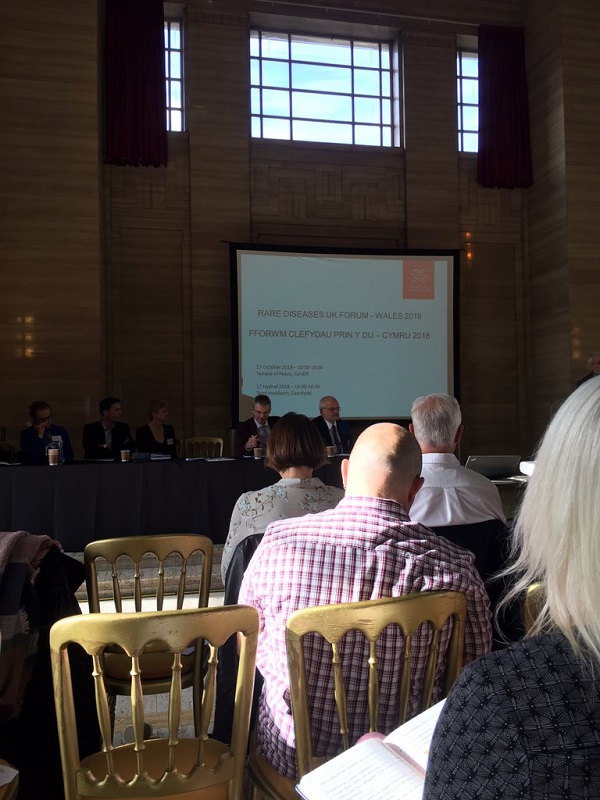 On the 18th Genetic Alliance hosted their 4th Annual Rare Disease Patient Network Meeting (Wales). This was an excellent opportunity to talk and learn from patients, health professionals and researchers with interest in rare diseases in Wales. The event had a real emphasis on understanding genetics; the real highlight, however, was a passionate talk from Sally-Anne Ashdown whose daughter suffers from chronic pancreatitis. Her experiences moved the audience.

Nick spoke at the orphan drugs and rare disease conference organised by SMI in London on 18 October. He presented the latest progress in AKU, including the recent scientific paper published by Prof Ranganath that shows the effectiveness of nitisinone for treating – and even partly reversing – ochronosis, which is the process through which black pigment accumulates in the joints of AKU patients. Attendees were particularly interested in the role that patient groups can play in the development of new treatments for rare diseases, especially as most such research is carried out by pharmaceutical companies with little patient group involvement.

Nick also joined a panel discussion chaired by Alastair Kent, the former director of the Genetic Alliance UK, on the wider role of patient groups in promoting rare disease research. The panel discussed everything from how patients can support basic research – such as cell and animal models – to patient involvement in the marketing authorisation process when a drug is licensed by a regulatory agency such as the European Medicines Agency.