Katie’s Cardiff Half Marathon for AKU

On Sunday 2nd October, AKU supporter, Katie will take part in the Cardiff Half Marathon to raise money for AKU. In this week’s blog, Katie shares why she is fundraising for AKU and how she plans to prepare for the big event. 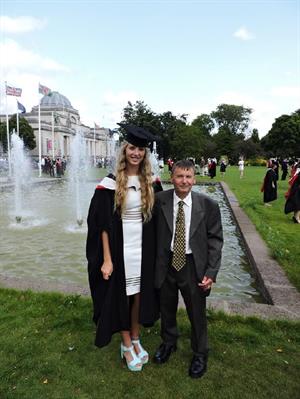 Hiya, I’m Katie, a 22-year-old physiotherapist working in Cardiff. I enjoy playing netball and keeping fit. My dad, Richard suffers from AKU. He had been struggling for a while with knee pain and last year it began to prevent him from walking and cycling – which of course made him unbearable!

Fortunately (for both of us) he had a knee replacement in September. Despite finding rehab painful initially, his strong motivation to get better and the “joys” of having a physio daughter meant he was back walking with his friend in 6 weeks and back cycling in December. I was impressed with his efforts and this motivated me to run the Cardiff Half Marathon for the AKU Society. Working within the NHS, I also hope to spread awareness of AKU amongst other health professionals.

I previously ran the Cardiff Half Marathon for the AKU Society two years ago while I was in university. Initially, when signing up to run again I thought it might be easier this time, no longer living the student lifestyle, battling the frequent hangovers and assignments. However, turns out the real world and “working life” is just as challenging. I am still adapting to the early mornings and the physical nature of my job means I am often shattered post work and find it challenging to motivate myself to exercise. Despite the fact I’ve been nagging my patients to exercise all day – very hypocritical I know!

Two years ago, I surprised myself and managed to run the Cardiff half in 2 hours 22 minutes. I would love to be able to match, if not improve that time. I am hoping to run 10-minute miles during the race, however I am uncertain whether I will be able to maintain that speed throughout. My target for the day is to finish the half marathon in 2hours 20 minutes. 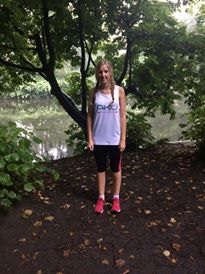 I signed up a while ago and it has only recently dawned on me that it is actually very close, with less than 6 weeks away! For the past month I have been going on roughly 2 runs a week – one shorter, faster 5K run, and a longer, slightly slower 6-mile run. I am currently averaging between 10-11 minute miles, so I need to step up my training to achieve my target time.

I’m aiming to increase my training to 3 runs a week, alongside my netball training. I plan to include a short 5k run, a longer 6-mile run where I maintain a good pace throughout and a longer, slightly slower run of at least 7 miles. The thought of this is intimidating and perhaps a tad ambitious but hopefully the upcoming time pressure will spur me and my training on. I have a couple of short holidays planned in September so I will have to be extra strict in sticking to my running schedule.

I would be extremely grateful for any donations, if you wish to sponsor me you can on:

Thank you, Katie for your commitment to supporting the AKU Society! We are really impressed by your training efforts and wish you the best of luck on the big day. Please consider donating to Katie’s JustGiving page to spur her on in her last month of training.
Robert Minter2019-04-02T13:18:48+01:00August 31st, 2016|