Today is Garrod day, an important event in the history of AKU. The 25th of November marks the birthday of Sir Archibald Garrod who first identified that AKU was inherited in 1901. The day is now used to raise awareness of AKU.

Our co-founder and trustee Prof Ranganath has written a blog explaining Garrod’s research and his impact on our current understanding of AKU:

Garrod day celebrates the birth of Archibald Edward Garrod on 25th November 1857 in London to Sir Alfred Baring Garrod, a physician at King’s College Hospital, and his wife, Elisabeth Ann Colchester. The family originally came from East Anglia and were all high achievers with Garrod having two brothers and two sisters.

Thanks to the foresight of the headmaster at his school, Garrod was encouraged to pursue further education despite an unpromising start since his father had decided to send him to East Anglia to run the family estate business. After a B.A from Oxford in 1880, he completed his medical degree at St Bartholomew’s Hospital (Barts) in London in 1884.

In 1886, when proceeding to his MD degree in Oxford, he married Laura Elisabeth Smith, the daughter of Sir Thomas Smith, a surgeon at Barts. Between 1884 and 1887, he worked as a casualty physician, assistant demonstrator in practical medicine, medical registrar, demonstrator of morbid anatomy, and lecturer on chemical pathology.

He was already interested in research having published a manual on the laryngoscope in 1886, becoming a member of the Royal College of Physicians in 1888. Like his father who discovered that uric acid caused gout, Garrod was interested in joint disease publishing on rheumatic fever differentiating it from rheumatoid arthritis. 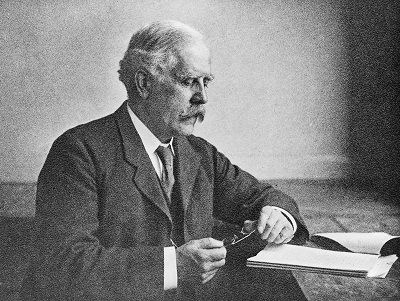 During his studies on rheumatic diseases in the 1890’s, he began to investigate urinary pigments for the purposes of detecting changes in metabolism by disease. He described urohematoporphyrin in a patient with chorea in 1892, and also found small amounts in normal urine. He learnt the use of spectroscopy during this time.

In addition to working at Barts, Garrod also worked at Great Ormond Street Hospital and in 1897 he examined and diagnosed a three-month old boy, Thomas P, with reddish-brown staining of nappies as alkaptonuria described by Carl Heinrich Detlev Bodeker in 1858. In 1891 Michajl Volkov and Eugen Baumann showed that alkaptonuria was due to homogentisic acid (HGA), derived from tyrosine.

Developing an improved chemical method to quantify HGA, Garrod went on to measure HGA in many AKU patients and pulled together data on around 39 cases of AKU by 1899 in London. He had noticed that AKU occurred more frequently among siblings. In 1901, the parents of Thomas P had a further child with AKU and the mother told Garrod, when asked, that she and her husband were first cousins with their mothers being sisters. Garrod then found that the family peculiarity was a common theme in other families of AKU patients with more than one person affected in the family.

Although the prevailing theory of the cause of AKU was intestinal infection, proposed by Baumann, Garrod did not believe this. Walking home one afternoon, he had the brainwave that AKU could be an inherited error of metabolism similar to congenital structural malformations. Garrod also read the book Mendel’s Principles of Heredity published in 1902 by biologist William Bateson, which explained the recessive inheritance pattern in AKU that he was observing. To strengthen his ideas, he studied inheritance in cystinuria and albinism and concluded that they were similar alternate modes of metabolism. He would go on to study another disease called pentosuria.

In June 1908 Garrod published a book entitled Inborn Errors of Metabolism, suggesting that alkaptonuria is derived from the lack of a specific enzyme that catalysed a specific chemical change within living tissue. The lack of such an enzyme resulted in the accumulation of an intermediate substance that was excreted.

The metabolic error in alkaptonuria is an inability to break down phenylalanine and tyrosine. Since the inborn error was inherited and caused by a specific Mendelian factor (nowadays called a gene), Garrod introduced a link between a specific enzyme and a specific gene. He proposed the one gene-one enzyme hypothesis that resulted in the Nobel Prize being awarded to George W Beadle and Edward L Tatum in the 1940’s proving this idea, acknowledged by the Nobel Laureates during their acceptance speech.

There was tension in the scientific community since Garrod’s time, between competing ideologies of Darwinism established in 1860 and Garrodism, although now it is known that these two ideas are complementary rather than contradictory. He won numerous awards and honours during his lifetime including being elected as a fellow of the Royal Society and chosen to succeed Sir William Osler as the Regius Professor of Medicine at Oxford University in 1920, a position created by Henry VIII.

He was knighted for his services when he joined the army during World War 1(WW1) in 1918. Tragically he lost two of sons during WW1 and his remaining son to the influenza epidemic. In 1919 Garrod returned to St. Bartholomew’s Hospital as director of a new medical unit that included a clinical laboratory close to hospital wards. At Oxford he worked to develop clinical investigation.

Described as a tall, handsome man of distinguished appearance and kindly manner, Garrod taught medical students to think biochemically. He was said to be a supremely effective bedside clinician who could elicit the signs and symptoms of disease with great skill and simplicity. In 1923, he published a second edition of Inborn Factors of Metabolism. In 1924, Garrod delivered the Harveian Oration to the Royal College of Physicians, ‘The debt of Science to Medicine’, pointing out the role of clinical observation to the growth of medical science.

Garrod retired at age 70 years from Oxford, moving to their family house in Suffolk with his wife. He moved back to Cambridge where his daughter, a renowned archaeologist was based. He suffered loss of sight near the end of his life and died of coronary thrombosis at age 78 years in his house in Cambridge. He is described as a traditionalist, solemn, ponderous, shy but collegiate, humble but quick-witted. He called himself a ‘wanderer down the by-paths of Medicine’.

It is difficult to pay true homage to one of the greatest scientists. Garrod will always be best known for his work on alkaptonuria and in his own words – “Of inborn errors of metabolism, alkaptonuria is that of which we know most, and from the study of which most has been learnt.” A. E. Garrod, 1908. This disease was the prototype of the inborn errors of metabolism. It was the first hereditary human disease whose mode of transmission was known and through its use the first intermediary metabolic pathway was elucidated. He did not work much on the arthritis or the ochronosis of alkaptonuria as he intuitively understood that the key was understanding the metabolism of tyrosine.

It is wonderful to celebrate Garrod annually as an undoubted genius and a pioneer well ahead of his time.