Genetic Alliance UK is a national charity whose aim is to improve the lives of patients and families affected by all types of genetic conditions. They are an alliance of over 180 patient organisations. Their research and innovation in the field of genetic medicine is important to the AKU Society and other similar organisations. They provide a united voice for lesser known charities, influencing governments, policy makers, industry and care providers such as the National Health Service.

At the end of September, Rory and Lesley attended Genetic Alliance UK annual Conference. This year’s theme was ‘Successful Partnerships’, and was designed to give a platform to some of its 180+ members who have shown excellence in creating and maintaining partnerships across the patient, clinician and research divide. Below our new Fundraiser Rory, gives his opinion in the day.

The day started frenetically with me trying to follow Lesley through the rush hour underground crowds in London. After some fleet-footedness I wasn’t really ready for, we made it to the Amnesty International building. We then had coffee and mingled with other members of rare genetic disease organisations. It was interesting to hear their stories and reassuring that they faced similar difficulties to us. As many AKU patients have discovered at our workshops, it’s important to meet others and to be a part of a larger community.

After the Genetic Alliance’s annual meeting there was a presentation by Dr Gina Radford, the Deputy Medical Chief Officer on the Impact of Genomics on Healthcare. Although interesting, we both felt this would have benefitted from more detail

Then it was a buffet lunch followed by short presentations on other rare genetic diseases. This was the part that I found the most rewarding. I particularly enjoyed Heather Band from the Batten Disease Family Association. The similarities between our two organisations are striking and it was good to see the similar paths we had taken to be where we are today.

Just my fifth day working for the AKU Society brought many insights into the challenges and great work that is being done to fight rare genetic diseases. the event as a whole was a great introduction, giving me the chance to meet some very interesting people and I learned a lot.

I also learned that it’s a good idea to wear running trainers if you’re travelling with Lesley! 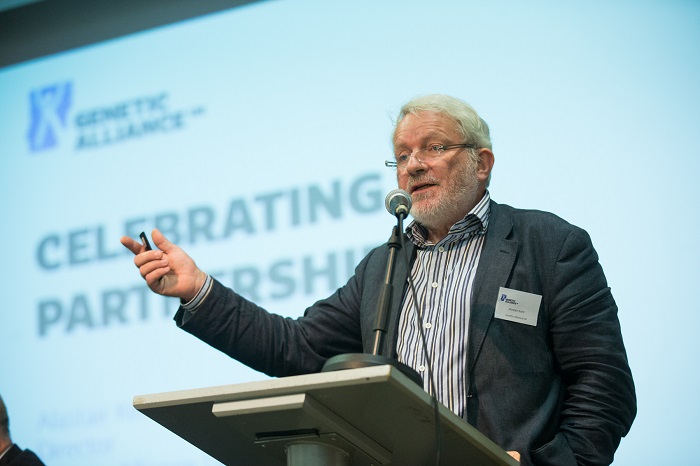 Lesley found the presentation by Sarah Rickwood ‘The New Challenges of Orphan drugs in Europe’ of particular interest especially with our involvement with DevelopAKUre looking at the effectiveness of nitisinone in AKU. It is hard to believe that there are 30 million people in the EU living with a rare disease (6-8% of the EU population) and only 5% of rare diseases have an approved drug. Sarah highlighted that collectively rare diseases are not rare, this is a specialist community with a high unmet need and a major opportunity for the pharma industry.

She was surprised to hear Alistair Kent UK Director of Genetic Alliance announce that he was stepping down at the end of March next year. After being with them for over twenty years, he was very much been the face of Genetic Alliance. Definitely not an easy pair of shoes to fill for any new person coming in.

For more information on the conference and Genetic Alliance UK visit http://www.geneticalliance.org.uk/