Cambridge Half Marathon 2020 – On The Day

On Sunday 8th March, our Fundraising Officer Juliet and CEO Nick were at Midsummers Common in the centre of Cambridge to cheer on our half marathon runners Juliette and Rob. They braved the 13-mile Saucony Cambridge Half Marathon around Cambridge. In today’s blog, we hear from Juliet about what happened on the day.

It was a sunny day on Sunday – something we all remarked at, mainly because the weather at the half-marathon the past three years has been cold and wet! 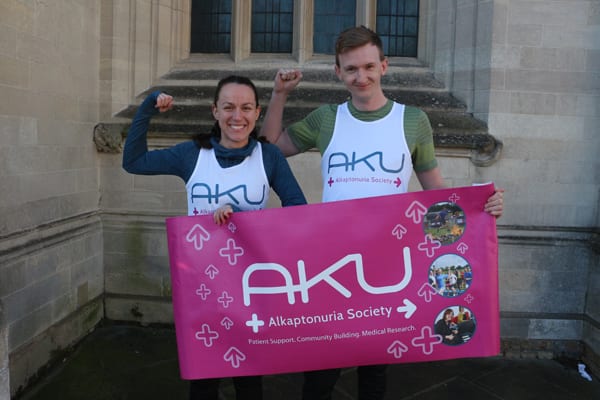 We met Juliette and Rob at a church near Midsummers Common for some fun fundraising photos and to catch up with them about how their training has been going. They were quite pleased with the weather since they had been training in Liverpool, even training in the hail!

Midsummers Common was packed with 12,000 runners getting ready to race. We headed over and wished Juliette and Rob good luck with the race as they got ready and headed over to the start line. It was lovely watching all the different runners set off, with a lot of racers wearing different charity tops, clearly having raised money for a good cause. The runners raced around the beautiful Cambridge centre, through the fields of Grantchester and back through Trumpington to finish the race.

We didn’t have to wait long for Juliette and Rob to finish: they did a remarkable job finishing the race in 2 hours and 20 seconds! They were given their runners goody bag including our own AKU Society one with a much-needed Lucozade inside. 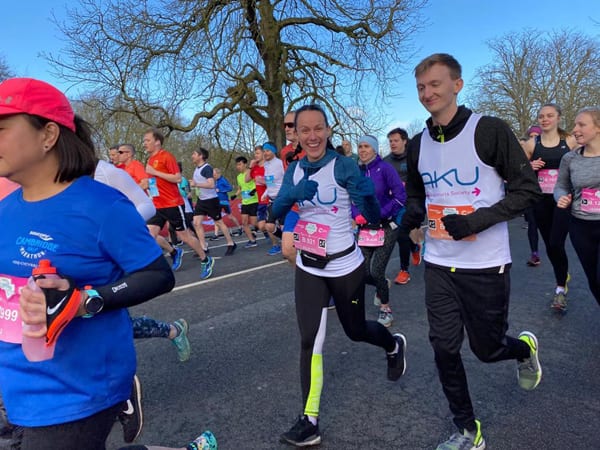 Juliette commented on people during the race asking what AKU is; it was great to hear that more recognition of AKU . We want to say a massive thank you to Juliette and Rob for travelling down to Cambridge and running the half marathon, raising vital funds for the AKU Society. Juliette and Rob have raised £923.75 (including GiftAid) – well done!

Juliette, who is in her final year of a PhD at the University of Liverpool explained why she was running the half-marathon ; “I have spent the last 3 years studying and researching AKU. I am very aware of the challenges and difficulties that AKU patients experience.”

Also, congratulations to Dave Brown, co founder of Healx, who ran 13.1 miles around his village on Saturday 7th March in support of the AKU Society. He has donated £1,000 to the AKU Society.

The funds raised from the half-marathon will go towards our International Patient Workshop later this year in November. Thank you so much to our runners who raised this incredible amount for the AKU Society.

Check out Juliette & Rob’s JustGiving page if you want to give final donations to their fantastic achievement.

If you would like to get involved with similar AKU fundraising events in the future or want to raise money for AKU, then please contact our fundraising officer, Juliet, [email protected] to learn more about what we have coming up and how you can raise funds for AKU.

As mentioned in this blog, we will be having our International Patient Workshop later this year in November in Liverpool. We are very excited for this event to happen! Please keep an eye out on our social media for more announcements on the workshop. We can’t wait to see everyone there. 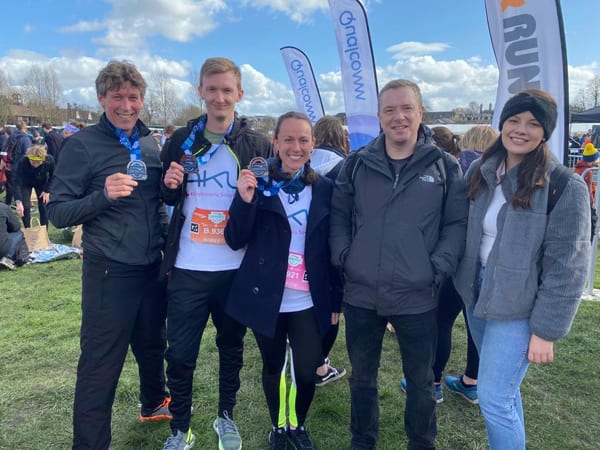