A Happy New Year from Everyone at the AKU Society. Now that 2018 is well and truly behind us, we would like to take the opportunity to look back at another successful year for the AKU Society. 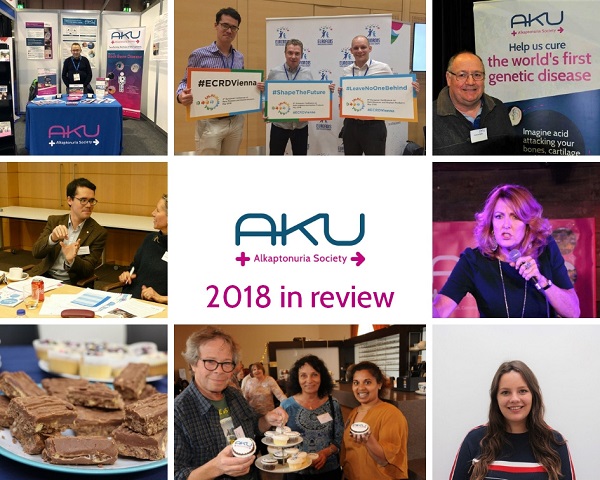 In April we hosted our second international patient workshop in Liverpool. As with our previous one, this workshop was a huge success: 89 patients travelled from all over the world for the two-day event held at the impressive Bluecoat Centre. The workshop had talks from the leading AKU researchers and exciting news about the progress of our understanding of AKU. At the end of day one, we had a fabulous meal and heard passionate stories from AKU patients in Canada and Brazil. We will have another International workshop most probably in 2020. You can read more here.

In 2018 we had some brilliant news about research from the National Alkaptonuria Centre (NAC) in Liverpool. Over three years they studied patient’s receiving nitisinone through the centre and found that the drug was not only treating AKU but in some cases reversing the visible pigmentation.  The results of the study were published in a journal called Molecular Genetics and Metabolism. This will help us in our attempts to make nitisinone available globally.

Last year we also announced the Subclinical Ochronosis Features in Alkaptonuria in Paediatric Age (SOFIA-paediatric) study. We will study children with AKU under the age of 16 for the first time, which will allow us to truly understand at what age the damaging symptoms of AKU start. The study will span across the three trial sites from SONIA 2 – Paris, Liverpool, and Piestany in Slovakia – as well as the National Institutes of Health in the USA. The Childwick Trust awarded £60,000 to support the UK element of the study. We hope to start the project in the next year.

In 2018 we said a fond farewell to Reece Edmends, our Admin and Communications Officer. Reece left us to go back to Cambridge University to study for a masters in classics. He enjoyed his time with us and will be missed.
Juliet Rowe, our fundraising officer, joined us in September. Juliet is running our community fundraisers events, such as Garrod Day and our Stand Up for AKU comedy night. She will also be applying to trusts and foundations to support our ongoing research projects with much-needed money. Make sure you say hello to Juliet when you meet her.

Three new trustees also joined our ranks. AKU patients Duncan Batty and Tony Esmond brought their years of experience with AKU, the NAC and nitisinone along with their personal lives, Duncan as a biochemist and Tony in NHS management. They will be a real asset.
Prof Jim Gallagher has also officially joined us. Jim will be a familiar to most AKU patients. It’s no exaggeration to say that he is the driving force behind a lot of AKU research. His expertise will continue to be extremely valuable to us at the AKU Society. 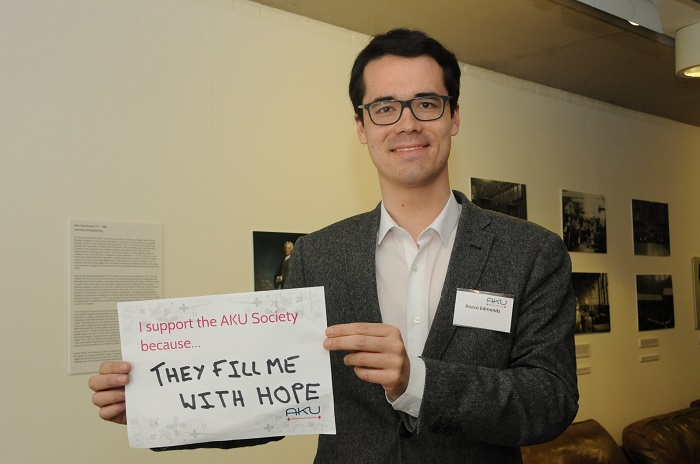 AKU on the road

2018 saw the AKU Society team travel far and wide. In May, Nick, Reece and Ciarán travelled to Vienna to represent the charity at the European Conference on Rare Diseases and Orphan Products (ECRD), hosted by Eurordis – Rare Diseases Europe. The conference was a brilliant way for us to learn about the advancements in the rare diseases world while highlighting the needs of AKU patients and the excellent research we have funded.
We also exhibited at the Best Practice conference in Birmingham, and the Royal College of Nursing’s Congress in Belfast, along with many other events across the country.

In August, we held our ever-popular Stand Up for AKU comedy night hosted by the hilarious Pam Ford at the Portland Arms in Cambridge. This is the third time we’ve held a comedy night and each time it gets better and better. This year we had five comics telling jokes and singing some hilarious songs. The night raised £469.19. We are more than likely to hold another night in 2019.

Our Garrod Day Coffee Morning was another success this year. The day marks the birthday of Sir Archibald Garrod, who first described AKU way back in 1902. Juliet held a coffee morning in the AKU office with some delicious cakes on offer. We also held a raffle with some fantastic prizes. In 2019 we are looking to make Garrod Day truly international with cakes sales all over the globe.
Jamie Rumbelow ran through the historic streets of Edinburgh for the AKU Society in May. He raised £363.85 and finished in a very healthy time. In 2019 we are looking for runners to run the Cambridge half marathon in March. For more information, please email [email protected]. 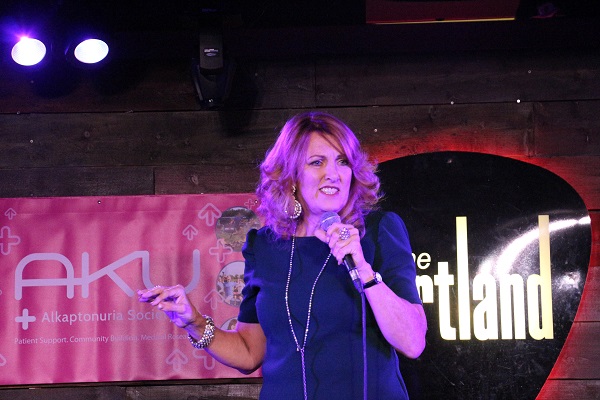