2 weeks ago, we attended the genetic alliance conference, where we celebrated all the work Genetic Alliance UK have achieved over the past 25 years.

The director, Alastair Kent started the day with a history of Genetic Alliance. He talked about how much we have learnt about genetics over the past 25 years. 2000 saw the first draft of the human genome, which was extremely time consuming and expensive. Now, in 2015, a genome can be sequenced in a few hours at significantly reduced costs. Alastair also talked about the development of pre-implantation genetic diagnosis (PGD), which is a major advance in genetics and has the potential to prevent a child from living with a life-limiting condition. 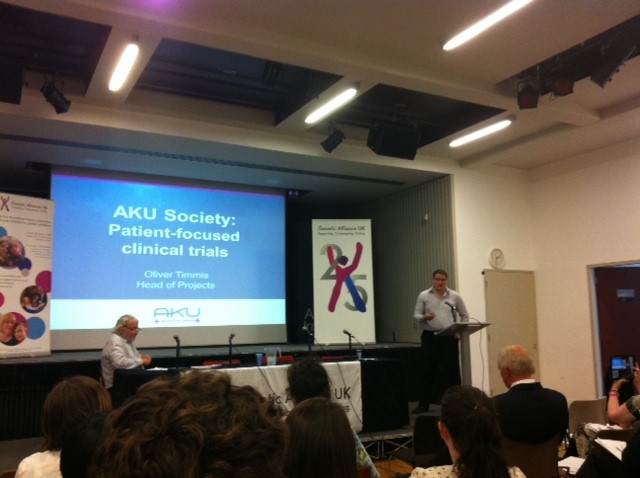 He ended his talk with a few forwarded glances, where he acknowledged new opportunities and new challenges. He noted the important, yet challenging notion of seeing healthcare as a human right, not as a purchase. Alastair finished with a promise that the alliance will continue to put forward and fight for the voices of patients and families over the next 25 years.

Karen Temple, the professor of medical genetics was the second speaker of the day. Karen was keen to point out the major changes in genomic technologies and improved communication since the alliance was founded in 1989. She discussed the major genome sequencing project that took place 1990-2003. Approximately 23,000 genes were established, yet clinical significance has only been established for 5,000 of these genes. This clearly highlights the complexity of such a project and shows that while we have learnt a great deal about genetics over the past 25 years, we still have a lot more to learn.

Karen went on to emphasise the importance of diagnosis. While some have criticised the notion of giving a diagnosis without approved treatment, Karen stressed the fact that a better genetic diagnosis improves care and increases your chance of treatment. She finished her talk with an important message that we need to change the NHS to predict and prevent, rather than diagnose and treat.

Following lunch, attendees were involved in an interactive session, where Sarah Harper, professor of gerontology invited the audience to look forward to the health of the population over the next 25 years. The project Sarah is undertaking will develop a forward looking vision, allowing them to identify health problems and suggest appropriate building blocks to put in place.

Sarah noted the importance of public engagement in the project and asked the audience to rank the listed aims in order of importance. The aims included improved physical and mental health, tackling ine

The next session of the day involved ‘celebrating our members work’, and three patient groups were invited to talk about their achievements.

Our very own Oliver Timmis was the first speaker, who talked about the patient centred clinical trial we are currently running called DevelopAKUre. With AKU being such a rare disease, recruiting 140 patients was a major challenge. Therefore having a patient group who knew and engaged with these patients on a regular basis was crucial for recruitment success. Oliver talked about the importance of engaging with patients through online platforms such as Facebook, Twitter and Rareconnect. He ended his talk by highlighting the crucial message that ‘patients are key to everything we do’.

Kerry Leeson-Beevers from Alstrom Syndrome was the next speaker. Alstrom Syndrome UK was started by a parent, who tragically lost 2 children due to lack of information. Kerry’s 14 year old son also suffers from the condition and these personal stories mean that patients, carers and families receive amazing support from people who really do understand what it is like.

ave Roberts from Niemann-Pick UK was the final speaker of the day. Like many rare disease groups, Niemann-Pick was formed by a group of passionate parents who wanted to make a change. Dave spoke about all the fantastic work the charity has done, including providing support, raising awareness, facilitating research and forming collaborations.

The day ended with a tea party to celebrate Genetic Alliance’s 25th anniversary. Alastair Kent cut the cake and we all celebrated the fantastic achievements Genetic Alliance UK have made over the past 25 years.