Alkaptonuria (AKU) was the first condition noted as following Mendelian Inheritance by Sir Archibald Garrod in 1902.

Since then, more work has been done to understand its genetic mechanism. AKU is now understood to be a recessive disorder, caused by a single gene defect. It is mapped to Chromosome 3 between regions 3q21-q23, the site of the homogentisate 1,2-dioxygenase (HGD) gene.

HGD is a vital enzyme in tyrosine metabolism. The graphic below shows a general overview of the pathway. With a malfunctioning or inactive HGD
enzyme, alkaptonuria patients are unable to convert homogentisic acid (HGA) into maleylacetoacetic acid. Instead of the natural condition, in which excess tyrosine is eliminated from the body, AKU patients end up converting excess tyrosine into HGA. 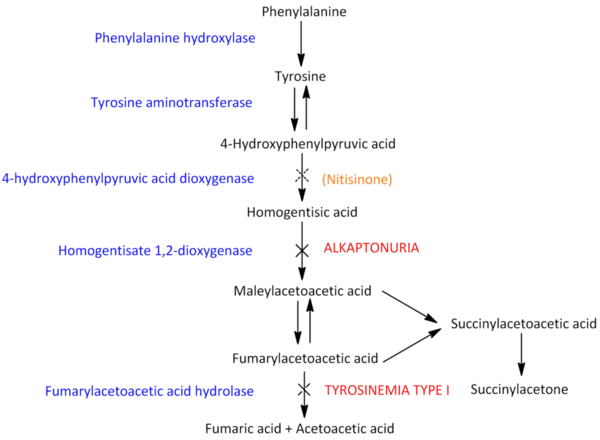 In the body of an AKU patient, HGA accumulates at more than 2,000 times the normal rate. Some of this is excreted in the urine, but a significant quantity remains within the body. HGA turns black on oxidation, leading to black urine and occasional black sweat which can be indicative of alkaptonuria. A small proportion of patients, however, will not develop these symptoms.

Much of the research into AKU has focused on the urine. It was discovered that the darkening was delayed in an acidic solution and accelerated in alkaline conditions. This affinity for alkali led Boedeker, in 1859, to describe the urine as containing an alkapton, later leading to
the name alkaptonuria.

Through a simple test with Benedict’s sugar reagent, it was noted that the urine was a powerful reducing agent. This not only reduces the copper reagent to an orange precipitate, but also darkens the solution due to its alkalinity. The net effect is orange particles suspended in a muddy brown
solution.