AKU was first described as an inherited disease by Sir Archibald Garrod in 1902. Sir Archibald was a true pioneer – relying upon simple observations to understand fundamental aspects of human biology. He was an Edwardian doctor who specialised in what we now call, metabolic medicine.

After treating several patients with AKU, and looking at their family histories, he realised the disease followed patterns. It was quite common for brothers and sisters of patients to also have AKU; and for it to be more common in the children of a consanguineous marriage. He came to realise that AKU was somehow inheritable.

Sir Archibald knew AKU was caused by a chemical mistake (now known to be the chemical homogentisic acid), which he termed an ‘inborn error of metabolism’. While investigating the mysteries of AKU, Sir Archibald became friends with William Bateson, a Cambridge scientist with an interest in the work of Gregor Mendel, the monk famous for early experiences into the genetics of garden peas. Bateson realised AKU and its inborn error of metabolism was actually a Mendelian recessive character; a compound that was inheritable along a predictable pattern and which caused disease.

For the early 20th Century, this was ground-breaking – the ideas of inheritance and genetics were only just being formed. The discovery of DNA was still 50 years away, so there was little understanding of how diseases could follow family lines. The work of Garrod and Bateson showed that a disease could be inherited and was determined by a biochemical compound. This helped develop the idea of a genetic disease, and gives AKU its claim to fame as the world’s first genetic disease.

Sir Archibald Garrod went on to present AKU, along with three other inheritable diseases (albinism, cystinuria, and pentosuria) at a Croonian lecture in 1908. It was here that his term: an ‘inborn error of metabolism’ became known and eventually led to the creation of a medical society: the Society for the Study of Inborn Errors of Metabolism (SSIEM) in 1963.

William Bateson meanwhile took the example of AKU and helped create modern genetics. He is credited with naming the word: ‘genetics’ along with the well-known terms: ‘heterozygote’, ‘homozygote’ and ‘allele’. In 1910, he founded a journal to help explain this new phenomenon of science, called the Journal of Genetics.

Sir Archibald summed up the importance of his research into AKU and other rare disease as: “The study of nature’s experiments is of special value; and many lessons which rare maladies can teach could hardly be learned in other ways.”

While Bateson used the more concise: “Treasure Your Exceptions!”

Our very oldest AKU patient is a mummy called Harwa from 1500BC. In life, he was a doorkeeper in the Temple of Amun, the largest temple in Egypt at the time. He was the first mummy to be flown on an airplane and is currently on display at the Field Museum of Natural History in Chicago. 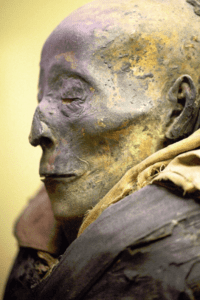 A Summary of AKU Research History