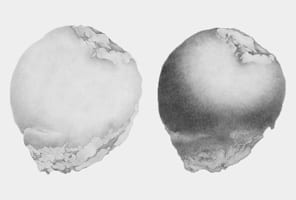 Every AKU patient will experience joint pain at some point in the lives. Typically, pain starts in the back when patients reach their 30s. Pain usually spreads into the other major joints, including the hips, knees, shoulders, elbows and feet. Patients can take pain relief medications to manage the pain, and most will eventually require surgery to replace joints once they become seriously damaged.

AKU patients in their 30’s, often start to notice joint pain – particularly in their back or spine. Homogentisic acid (HGA) builds up in the connective tissue of the body (such as the bone, cartilage and the skin) in a process called ochronosis, where the black pigment forms.

HGA attacks the bones and cartilage, turning them black and brittle over time. Joints become less able to cope with activities which put them under strain, with the large weight-bearing joints, such as the knees, shoulders, hips and the spine, the worst-affected.

Many will have surgery to replace black and brittle joints, and sometimes patients end up wheelchair-bound. In general, patients start complaining of back pain in their 30s, and knee pain in their 40s. However, the onset of osteoarthritis can vary greatly from one patient to the next. Hip and shoulder pain often occurs later by their 50s.