Rare disease research has grown significantly over the past decade, yet conferences devoted entirely to this remain scarce. That’s why the REACT Congress, set up by Dr Olivier Menzel and his BlackSwan Foundation, is so important.

At its first gathering, in Switzerland in 2012, I had the honour of giving a presentation about AKU. Afterwards, I was approached by several scientists who wanted to carry out research into AKU. For instance, one of them was interested in developing a tadpole model of AKU that would allow us to screen potential drugs to see which ones might have a positive impact on the disease.

Subsequent REACT Congresses were equally useful, leading to connections that have accelerated our research into AKU. According to its organizers, the first three REACT Congresses brought together 1,500 scientists and led to more than 50 collaborations. For instance, the latest congress, in Toronto in early May of this year, was an excellent opportunity to find out more about gene therapy and discuss how this could be applied to AKU. 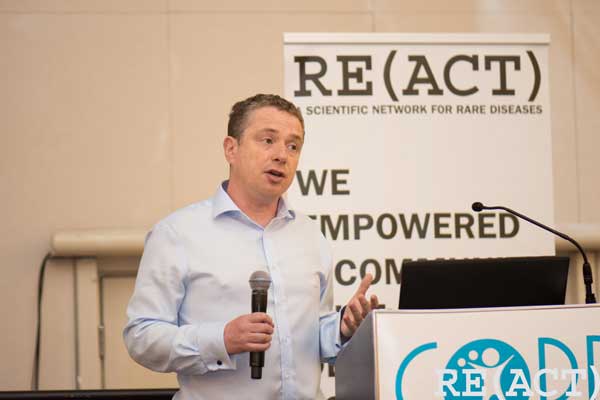 I presented at the Toronto congress during a joint session between REACT and the Canadian Organization for Rare Disorders (CORD). The objective was to show how patient groups can be heavily involved in drug development and ensure the focus remains on delivering for the patient.

Indeed, the DevelopAKUre programme, which brought together 13 partner organizations from around Europe, is often seen as an example of patient-led drug development. Coordinated by AKU expert Prof Ranganath from the Royal Liverpool University Hospital, the seven-year DevelopAKUre programme officially ended in January of this year. Our scientists are now pouring over the data to see whether it is positive. The result will be announced later this year.

Olivier Menzel has always shown a keen interest in our AKU work. I first met him in November 2010 in Geneva, at an industry conference on orphan drugs. We were among the few non-profits attending in a sea of hundreds of pharma executives.

Nick and Olivier in Toronto

But Olivier didn’t stop there. He also set up the REACT Community, a crowdfunding and knowledge-sharing digital platform that connects researchers, patients and other rare disease stakeholders.

Cooperation is key to fighting rare diseases. From an AKU perspective, we had to create a network of scientists, clinicians and patient groups across Europe and the Middle East to implement the DevelopAKUre programme. We’re also in close contact with researchers in the US who are studying AKU.

That’s why Olivier’s work through the REACT Congress and Community and the BlackSwan Foundation is so important and why the AKU Society will continue to support it for years to come.