Patients who attend the National AKU Centre are given off-license nitisinone. 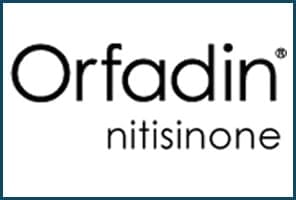 Nitisinone is currently licensed for use in treating another similar rare disease called hereditary tyrosinemia type 1 (HT-1). Patients who attend the National AKU Centre are prescribed 2mg daily, a significantly lower dose than prescribed in treating HT-1. Although it is not currently licensed for use in AKU, previous animal experiments and research studies have shown that nitisinone could be effective in treating it. Clinical research in the US showed that nitisinone reduced HGA levels by up to 95%. We are currently running an international clinical trial called DevelopAKUre, measuring the effectiveness of nitisinone in treating AKU.

AKU is caused by a missing enzyme, which means the body cannot break down a substance called homogentisic acid (HGA). Nitisinone acts by stopping the enzyme
which makes HGA from working. This then stops HGA from building up in the body and causing harm.

The drug nitisinone is being researched as the first potential treatment for alkaptonuria (AKU). Previous research has shown that nitisinone can reduce the levels of homogentisic acid (HGA) by up to 95 %. Animal models have shown that, if administered early enough, nitisinone could potentially prevent the disease from developing.

The US National Institutes of Health (NIH) began a three-year clinical trial of nitisinone in April 2005. Unfortunately, the results were inconclusive and more work needs to be done before the drug can be approved as a treatment for AKU.

We are involved in a series of clinical trials called DevelopAKUre, lasting five-and-a-half years. The trials will follow AKU patients taking nitisinone to see if the drug has any effect on the disease. If the trials show that nitisinone is effective in treating AKU, we will apply to get the drug licensed as an official treatment for AKU. We are currently recruiting for SOFIA, an observational study, looking at when symptoms begin in young AKU patients. If you are interested in taking part or learning more, please contact Ciarán Scott by emailing [email protected]. Further information can also be found on our clinical trials microsite, www.akusociety.org.

As nitisinone is licensed for another rare disease, hereditary tyrosinemia type 1, doctors can prescribe it to AKU patients’ off-label. Nitisinone is currently prescribed off-label to English and Scottish patients who attend the National AKU Centre (NAC) in Liverpool. Patients in Wales and Northern Ireland do not currently have funding for nitisinone. To find out more about the NAC, contact Lesley Harrison, our Patient Support Manager, by emailing her at [email protected].