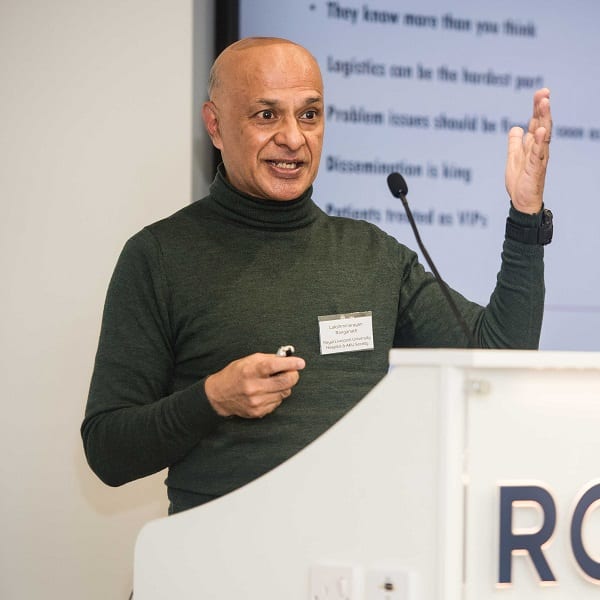 Professor Ranga is a semi-retired but busy  consultant in the NHS at Royal Liverpool University Hospital. He was appointed a Professor in Musculo-skeletal Biology in 2012 at the University of Liverpool. There was no NHS service available for rare disease Alkaptonuria in the UK when he developed an interest.

A patient with AKU, Robert Gregory approached Prof. Ranga to establish the AKU Society in 2003, and he remains a founding member, medical director and trustee to this day. At the time he got involved in AKU, systematic assessment of patients with this crippling disease was lacking. Exact numbers of AKU patients were unknown in UK and overseas. There was no effective treatment for AKU.

To address these issues, he established an NHS Highly Specialised Services funded  National Alkaptonuria Centre (NAC), which is being carried out as a long-term observational interventional study employing off-label use of nitisinone. Prof. Ranga was the inaugural Director of the NAC. Patients in the NAC are able to access nitisinone free of charge and access to a multidisciplinary team of experts. He was also involved in carrying out a national survey that identified 81 UK, 450 European and 1000 patients worldwide. He has pioneered an assessment of AKU patients.

He co-ordinated the EC-funded DevelopAKUre research programme that involved three trials into nitisinone use in AKU. This will bring advances in AKU to all patients with AKU worldwide. In recognition of his contribution to AKU, he was awarded the inaugural 2012 RARE Champion of Hope for Medical Care and Treatment.