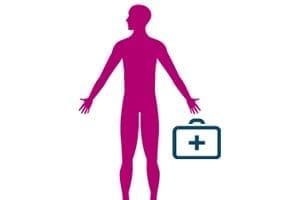 Alkaptonuria (AKU) can also affect several other areas of the body.

Most homogentisic acid (HGA) is eliminated from the body in urine, but as it passes through the genitourinary tract, it can increase the likelihood of developing stones, especially in those that do not drink sufficient fluids. This can be seen as kidney or bladder stones in both male and female patients and as prostate stones in males. Stones are a fairly common symptom of AKU, but they don’t usually have a serious effect on health. They can be painful, but most pass out of the body naturally. Occasionally larger stones need to be removed by simple operations.

HGA is known to be deposited on the cartilage of the voice box (larynx), the windpipe (trachea) and the airways to the lungs (bronchi). While this causes a black discolouration, it is not thought to cause any serious medical problems.

Effects on the skin are most noticeable in areas exposed to the sun and where sweat glands are located. Skin can take on a blue-black speckled discolouration and sweat can stain clothes brown. Pigmentation of the skin is more visible in some patients than others. It is often first seen in the ear lobe as well as in the bridge of the nose, cheeks, hands and skin overlying tendons. The age at which these effects become noticeable varies according to the individual.

The teeth, central nervous system (brain and spinal cord) and endocrine organs (which make hormones) may also be affected. The symptoms of AKU vary from one person to another. Those described here do not necessarily apply to every patient but generally will be seen to some degree. 1